The best independent guide to Mauritius

If you are searching for the perfect holiday destination, then you have just discovered it in Flic en Flac.
The town boasts paradise beaches, is set in a diverse and fascinating region, while still being safe and calm. Flic en Flac is ideal if you want an exotic holiday, and is more than just beaches but is without the hassle of holidaying in the developing world.

Flic en Flac is on the sheltered western side of Mauritius, and is famed for it's magical sunsets out over the India Ocean. Found within the town are numerous excellent restaurants and bars, while the pristine white beach is fringed with palms and lapped by turquoise sea waters.

Flic en Flac may have a less hectic ambience than many other tourist areas of Mauritius, but is well-positioned for day trips to the southern volcanic mountains or to Port Louis, the capital city.

There is so much to love about Flic en Flac, and we consider it to be one of the world’s greatest destinations for a relaxed, safe, paradise beach holiday. 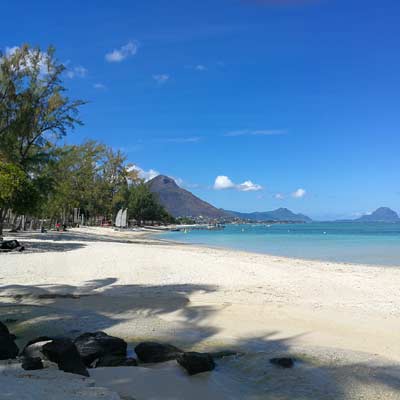 The finest beach of the southwestern side of Mauritius, with pristine sands and turquoise sea waters 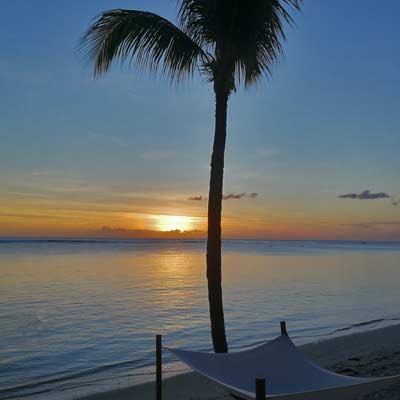 The magical sunsets, as the sun drops below the horizon and illuminates the ocean and sky in orange glows 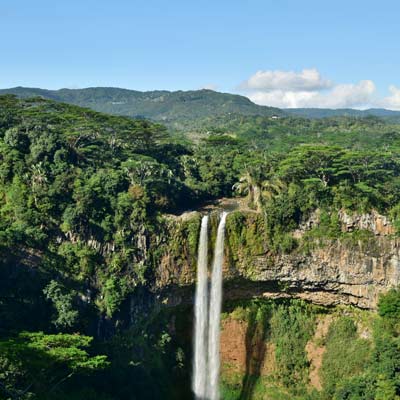 Day trip to the forested mountains of the Black River Gorges National Park. The image is of the Chamarel Waterfall. 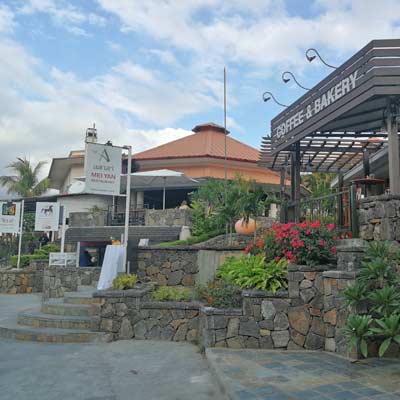 The relaxed and personable ambience of the town, with its diverse selection of nationalities

Is Flic en Flac for me?

Flic en Flac will appeal to three styles of tourists; Honeymooners, those needing a safe location (such as families) and those wanting a relaxed and calm destination (either for a romantic holiday or are more mature visitor).

If you are a restless visitor, you will find there is a lot to do and see in Flic en Flac and the surrounding region (suggestions later in this guide), and it should not be considered as a just a boring beach destination.

Flic en Flac is not a destination for wild nightlife and partying; the nightlife reflects the size of the town and is confined to Friday/Saturday nights. Flic en Flac is not an expensive destination, but the super inflated prices of many of the hotels can make it seem much more expensive.
Note: Language will never be an issue. French Creole is spoken by most people and the majority speak English and French fluently. Everyone who works within tourism speaks fluent English 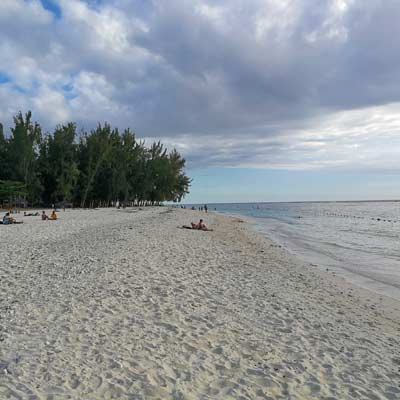 The public beach of Flic en Flac, close to the town centre 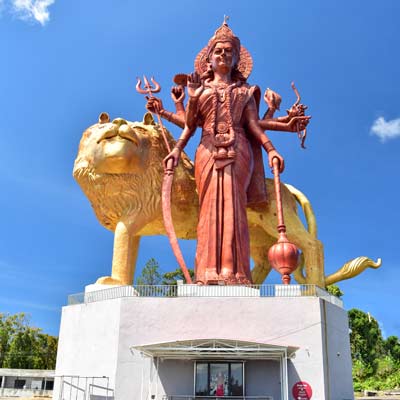 The giant statue of Durga Maa near the Grand Bassin

When to visit Flic en Flac?

Mauritius is blessed with a year-round tropical climate, but escapes the hurricanes, typhoons and extreme wet seasons that afflicts many other exotic holiday destinations. The winter season (July and August - Mauritius is in the southern hemisphere) are marginally cooler and less humid than the summer peak season (December January), when it is also the wettest.

There is always the threat of rain year-round but showers are always intense and brief. Flic en Flac is on the western side of Mauritius and is sheltered from the prevailing winds. Generally, the rain falls on the mountains or eastern side leaving the west of Mauritius relatively dry. 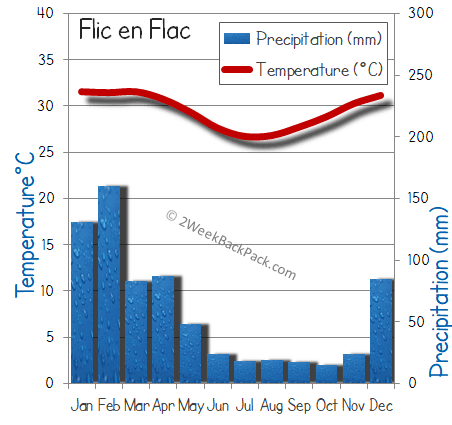 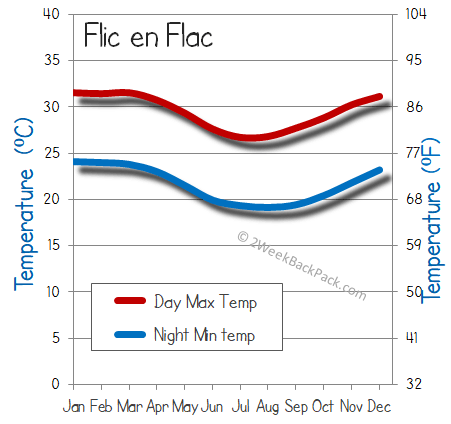 Insider tip: Mauritius makes for a great holiday destination in July-September, when the whole of Europe is crowded with school holidays, the Caribbean has potential hurricanes and Asia is unbelievable hot and humid.

The beach of Flic en Flac is beautiful. The white coral sands extend for 5.5km from the harbour in the north, past the designer 5-star resort in Wolmar, to the Tamarin Bay in the south.

The beach is protected from the powerful Indian Ocean waves by a coral reef approximately 400m from the shoreline. These sheltered waters are safe for children and ideal for sea activities such as kayaking, paddle boarding and snorkelling.
Warning: If you intend on spending time in the water, bring some water-proof shoes as there are fragments of coral between the reef and the beach. Only swim where it is safe to.

The best sections of the beach are to the south, in the Wolmar area, and are accessed via the two public beaches, aptly named Public Beach 1 and Public Beach 2.

All beaches in Mauritius are open to the public but certain hotels try to make it restrictive and difficult to spend time on them. The beaches do have hawkers and sellers but are less prevalent and annoying than many other exotic beach locations.

Things to do in Flic en Flac and Wolmar

Flic en Flac is a holiday destination which has much more to see and do than just paradise beaches and is great if you are a restless tourist.

There are all of the common beach and sea-based activities including; snorkelling, kayaking (rental Rs 1,500 per day), and stand up paddleboards. From the harbour are fishing trips or dolphin watch tours (early morning) or speed boat tours.

For day trips there is the dormant volcanoes of Black River Gorges National Park, with the dense forests and deep ravines. As there is limited public transport it is often explored as an organised tour or with private driver.
These tours often include the Hindi religious site of Grand-Bassin, Chamarel Waterfall (always a highlight), the Seven Coloured Earths and rum tasting at Rhumerie de Chamarel.

Port Louis is the bustling capital city of Mauritius, can be easily visited independently via the bus (90-minute journey). Within the city is an authentic market, the harbour front, Blue Penny Museum and Fort Adelaide.

Closer to Flic en Flac is the highly rated Casela World of Adventures, with its safari tours, zip lines, quads and chance to walk with lions. Cascavelle Shopping Mall just outside Flic en Flac has a decent selection of shops, while for better shopping head to the Phoenix Mall in Vacoas-Phoenix.
For golf there is the outstanding Tamarina Golf course Tamarin. 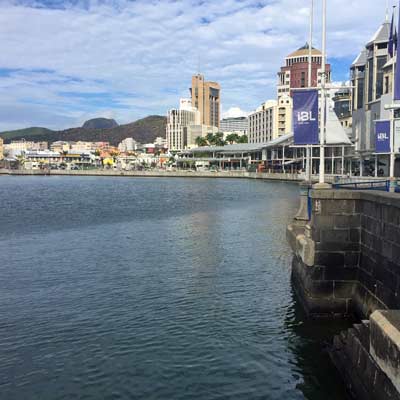 The harbour front in Port Louis 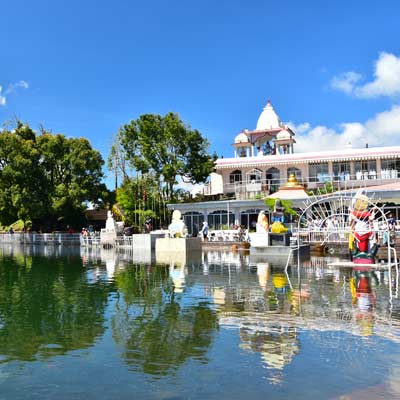 There are also day trips to the north of the island which would visit the Sir Seewoosagur Ramgoolam Botanical Garden, L'Aventure du Sucre (sugar museum) and the beaches of Grand Baie and Trou-aux-Biches.

Flic en Flac has a relaxed ambience, but there are many decent bars (Mosaic, Mafiozzo, Shotz), and on Friday/Saturday nights Shotz transforms into a late-night club.

As you can appreciate there is a lot to see while on holiday to Mauritius, and it should never just be considered as just a beach destination.
Related articles: Day trip to the south east of Mauritius

If this is your first trip to Mauritius

Mauritius may be in the India Ocean and relatively close to Africa, but it is unlike any other destination in the extend region.

There are no semi-guarded tourist zone such as with Cancun, Jamaica or Caribbean, no unreliable infrastructure as with Zanzibar or Philippines, no potential for illness as with India or Sri Lanka or backpackers trying to “discovering themselves” as in Thailand, Bali and Cambodia. Mauritius is safe, well organised and has the feeling of any developed western country.

This is the paradise holiday destination I would recommend to my parents, friends with children, or anyone wanting a truly hassle-free holiday. 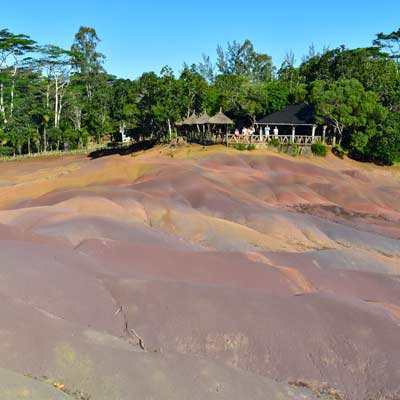 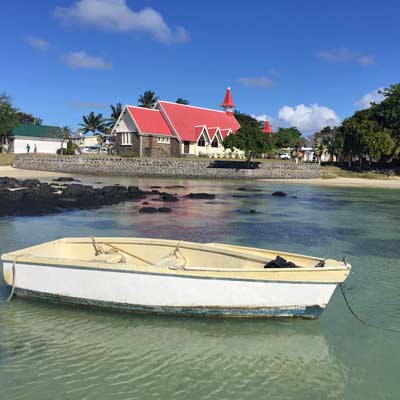 The Christ Church at Malheureux bay, on the far north of Mauritius

Why Flic en Flac instead of the north of Mauritius?

Flic en Flac is less touristy than the north of Mauritius. Most of the population of Martirous are based Port Louis, the crater valley of Vacoas-Phoenix or the relatively flat area of the north; the little town Flic en Flac is much calmer and peaceful. The southwest is generally drier as the rain falls over the mountains and Flic en Flac is closer to the beautiful mountains of the Black River Gorges National Park.
Our Opinion: no matter where you stay in Mauritius, you will have an amazing holiday.

The high-end hotels and resorts in Wolmar

To the south of Flic en Flac, in the area referred to as Wolmar, are six modern and elegant resort complexes. If you are taking a high-end package holiday, a honeymooner or other special trip, the Wolmar area of Flic en Flac is most likely where you will be based. This is an amazing area of Mauritius, and you will not be disappointed for truing somewhere slightly different.

The six resort are, the stylish “La Pirogue Mauritius” which was the first resort complex in Flic en Flac and owns the equally impressive Sugar Beach Mauritius next door, further along, is the Hilton, Sofitel, the Maradiva and Sands (both run by LHW). These are all beautiful resorts with impressive facilities and the room rate reflects the level of refinement in each of the 4/5-star complexes.

Be warned that food and drink prices reflect the 5-star rating and are incredibly expensive when compared to restaurants in Flic en Flac. All-inclusive options are very overpriced, and you need to eat drink significant amounts to make them worthwhile, and worst of all, some premium brands and better cocktails are not included. Mauritius’ all-inclusive have a long way to catch up with the Caribbean.

There are regular and inexpensive bus services (every 15minutes) along Wolmar resort road to Flic en Flac and onto Cascavelle Shopping Mall, certain services continue on to Port Louis. There are always taxis, and are about 3-4 times the price of the bus. If you are based in Wolmar you will not feel remote and can easily explore from the resort hotels.