Where To Stay in Boston? The best areas, districts and neighbourhoods for your Boston holiday in 2023

Boston, Massachusetts, is the capital of New England and one of the oldest cities in the United States. It was the site of two important battles during the Revolutionary War--the Battle of Bunker Hill and The Siege of Boston. Today, it's a thriving metropolis with a captivating mix of historic landmarks, universities, museums, and art galleries.

Boston's extensive history and vibrant population, means there are many unique and characterful districts within the city. Thankfully, the best tourist neighbourhoods are relatively close to each other, and the city boasts a decent subway system (called the 'T') to effortlessly whisk you around.

This guide will detail each of the main districts in Boston and help you choose the best area for your trip.

The best districts of Boston

The most popular districts in Boston surround the downtown area of the city. These are within walking distance of the historic attractions, the main shopping and dining areas, along with the major transportation hubs of Park Street Station, Downtown Crossing Station, and South Station.
The best districts if you are new to Boston are: 1) The Greenway 2) Downtown 3) China Town 4) Beacon Hill 5) Back Bay

The map below shows the main tourist areas of Boston and the three MBTA subway lines (orange, green and blue) 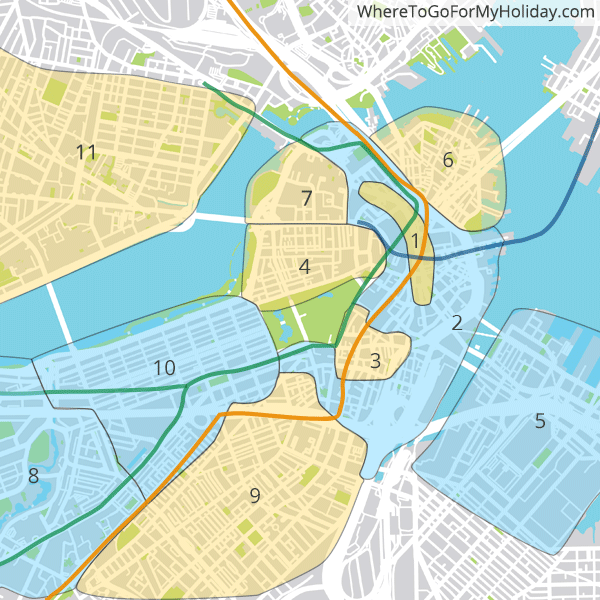 The map below shows the location of hotels and rental rooms in Boston. By altering the date to your trip, the map will display current prices and availability:

It's my first visit to Boston. Which district should I stay in?

If you've never visited Boston before, it's recommended to stay in the Downtown or Beacon Hill. This is because they're the best locations for seeing and learning about many of Boston's famous landmarks and areas, such as The Freedom Trail and Fenway Park. In addition, both areas are centrally located to the other neighbourhoods in Boston, making it easy for you to explore the city without having to drive around.

The main tourist areas of Boston

Downtown
The beating heart of Boston, close to everything, but is the district where hotels will sell out first. The Downtown area covers much of central Boston, and the district is subdivided into interesting neighbourhoods such as the Theater District, The Greenway and Chinatown.

Downtown Boston is a great location if this is your first time to the city. This area features easy access to public transportation, plenty of entertainment options, and dining. However, this area is one of the most challenging areas to find parking in, so you might want to avoid driving if possible and instead opt for public transportation.

The surrounding area has become a local, chic beachside hotspot with hopping bars, delicious restaurants, and walkways along the river. This is the ideal area of the city if you want a laid-back holiday area.

The Greenway
The Greenway is one of the most unique neighbourhoods in Boston and is located between Downtown, Beacon Hill, and the North End. This is one of the best areas in Boston if you want socially distanced activities since you can find miles of walking and cycling paths that follow extinct rail lines. You'll also find a variety of murals as you explore between parks such as Memorial Park, Piers Park, and Consitution Beach, offering a plethora of playgrounds, gardens, dog parks, and outdoor activities.

Beacon Hill
Hill is easily one of Boston's most picturesque and unique areas, featuring stunning brownstone houses and cobblestone streets. You'll find tons of 18th and 19th-century architecture between the hotels and restaurants on Charles Street and Beacon Hill. In addition, you'll discover everything from the Public Gardens and the Commonwealth Avenue Mall to Boston Common and The Freedom Trail.

Back Bay
Back Bay is one of the most well-known districts in Boston and is home to Newbury Street. The area features a variety of shops, restaurants that serve high-quality cuisine worldwide, outdoor cafes covered by flowering trees, and several museums. Back Bay is one of the best areas for shopping in Boston and is considered to be the alternative downtown area where the old city meets new style.

North End
The famous North End is home to many attractions such as the Paul Revere House and the Harborwalk. You'll also find plenty of history here thanks to its rich culture and colonial architecture, including several notable churches. Visitors will often refer to this district as "Little Italy" due to the numerous amount of Italian restaurants and bakeries.

South End
The south end is one of Boston's most scenic district, and is the perfect area to stay if you want to be close to downtown but in a neighbourhood-type atmosphere. If you're looking for something off the beaten path, this is the right neighbourhood for you since it isn't as well known or frequented by tourists compared with other areas of Boston. The combination of gardens, artwork, and unique eateries and boutiques make this a great place to explore.

The Fenway
While most think of The Fenway as a sports stadium, there is so much more to this neighbourhood than just the sports teams. It's an area with a strong sense of community and history as well as home to many colleges and universities such as Emmanuel College, Massachusetts College of Art and Design, Wentworth Institute, Simmons University, and MCPHS University.

And Cambridge…
Cambridge is on the western side of the Charles River and is the setting for Boston's famed universities, Harvard and MIT (Massachusetts Institute of Technology). There is a trendy multi-cultural vibe among the quiet streets and pretty parks. Because of the universities, there is a blossoming arts scene and a diversity of restaurants and evening hangouts. Generally, for a trip to Boston, it's better to be based closer to the city centre and visit Cambridge as a day trip.

Always choose the location in Boston you want to be based in, before looking for accommodation. This may sound obvious, but it is all too easy to be sucked in by an amazing discount or outstanding reviews, without really considering which area you will be staying in.

Also consider your needs before booking accommodation. Do you need car parking with your accommodation or do you want to be close to a 'T' subway station.

Where should I go as a business traveller?

If you're visiting Boston for business, you'll want to stay in the North End. That way, if you have any meetings or appointments throughout the day, it's easy to access your hotel without having to drive around and find parking. Plus, this location is well-known for its location and convenience since it's near various restaurants and shopping that will help you relax after a long day of work.

However, at nighttime, this area tends to turn into a quieter district since there are few restaurants and shops that are open late, making it perfect for business travellers who need to get a good night of sleep.

What areas of Boston should I avoid?

It's best to avoid the South Bay, Mattapan, and Roslindale neighbourhoods. These areas are on the outskirts of Boston, far from most tourist attractions and top hotels. Not only are they primarily residential and not well-known to visitors, but there aren't many options for entertainment or dining in these districts.

In addition, there isn't much to see or do since they don't have many attractions. On top of that, you'll need to have a car or take a long commute into Boston via public transportation to visit the main attractions and businesses around the city.

If I want to party, where should I stay in Boston?

As far as partying goes, there are a few districts that have the most nightlife and entertainment. The first is Back Bay or Beacon Hill since they're known for their lively bars and nightclubs. Plus, since it's a short walk from these areas to downtown Boston, you'll be able to access more restaurants and shops with ease without having to drive around.

The second is the South End or Fenway areas since they have a lively nightlife as well but are less expensive than Beacon Hill and Back Bay. In addition, this area is home to several colleges and universities, so it attracts a younger crowd during the weekends.

For a unique nightlife experience, head over to Seaport District. Here, you'll find a variety of laid-back bars and lounges that have a more relaxed atmosphere. So if you're looking for a more chill night out, this is where you'll want to go.

Where should I stay for a relaxing vacation in Boston?

If you're visiting Boston for a relaxing vacation, there are several areas that will suit your needs. The first is the North End since it has a very romantic and elegant atmosphere. There are many top-notch restaurants in this location as well as quiet cafes and bakeries along with plenty of street art to see so you won't get bored. You'll also be able to access several museums and Faneuil Hall Marketplace, as well as the Government Center, without having to drive around or commute via public transportation.

The second is Beacon Hill since this area has a charming and cosy neighbourhood setting with plenty of boutique shops along Charles Street that will help you indulge in the relaxation culture of Boston. Plus, if you're a runner or looking to take a jog along the Charles River Esplanade, this is one of the best places to do it.

What area is near the airport?

If you need to stay close to the airport, you'll want to consider staying in East Boston, which is located outside the city's central districts and is home to Logan International Airport. It's a short drive from the airport and has plenty of accommodations, but it isn't as well-known or lively as other parts of Boston.