Where to stay in Sarajevo? The best neighbourhoods and districts for your trip in 2022

Sarajevo, the capital city of Bosnia and Herzegovina, is one of Europe's hidden gems. Known as the 'Jerusalem of Europe', Sarajevo is a melting pot of different cultures, religions and traditions that have influenced the city through the centuries.

Sarajevo is a relatively small city, yet it's filled with cultural and traditional diversity at every corner. This makes it the perfect destination for a short break or as part of a longer tour of the Balkans.

This guide will detail the main neighbourhoods of Sarajevo and help you find the best area of the city for your trip.

The best areas of Sarajevo

Sarajevo is a city that is constrained by its geography. It lies along the Miljacka River valley - with the city orientated in an east-west direction - and is surrounded by towering mountains to the north, east and south. The oldest part of the city lies at the head of the valley (to the east), with newer sections of the city (Novo Sarajevo) expanded westwards down the valley. Sarajevo airport lies outside of the valley in the Novi Grad municipality, 6km from the historic centre.

Generally, all of the best tourist districts are to the east of the city, with the top 5 districts of Sarajevo being: 1) Baščaršija 2) Soukbunar 3) Gorica 4) Bistrik 5) Marijin Dvor

The map below shows the central districts of Sarajevo. 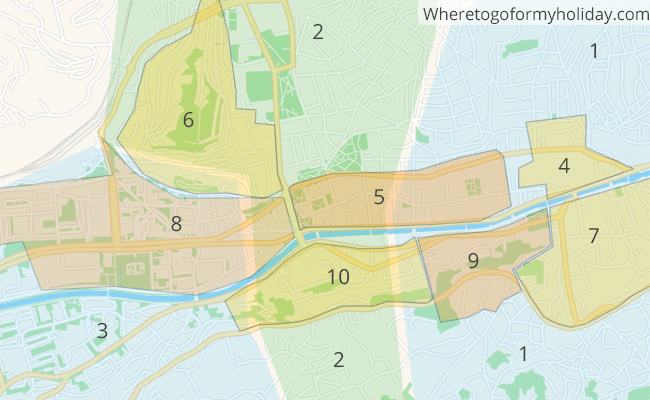 Sarajevo is expecting very high demand for hotel rooms and accommodation during the peak season in 2022 (Jul-Sep). This demand is fuelled by intrepid visitors looking to discover new and exciting destinations, especially for short breaks.

The map below shows the location of hotels and rental rooms in central Sarajevo. By altering the date of your trip, the map will display current prices and availability.

The top neighbourhoods of Sarajevo

Baščaršija
The most famous neighbourhood in the city, Baščaršija is the old town of Sarajevo. During the Ottoman era, this part of the city was Sarajevo's centre of trade. Today it is the cultural and historical centre of Sarajevo.

Strolling down the Old Town, you'll see the Gazi Husrev-beg Mosque, Sarajevo Cathedral and Emperor's Mosque, as well as the characterful Bazaar. Found within the district are the Sebilj and the Baščaršija Squares, the two focal points of Sarajevo. Baščaršija is also the district for the best nightlife, with many of the best bars and nightclubs in the city.
Generally, Baščaršija is the area you want to be based in for your trip to Sarajevo.

Bistrik
Bistrik is one of Sarajevo's oldest neighbourhoods, dating back to the 15th century. The district is located on the southern banks of the Miljacka River and lies on the opposite side to the Baščaršija district. This location provides an authentic and relaxed atmosphere, while still being close to the major sights of the city.

Found within Bistrik are two national monuments: the Konak and the Crkva sv. Ante (Church of St. Anthony).

The district is also well known for the Sarajevo Brewery, constructed in 1882. Today, the brewery offers fresh beer and an informative museum telling the story of its role during the Siege of Sarajevo (1992-1996).

Centar
Centar is regarded as the political, commercial and cultural 'centre ' of Sarajevo. It lies between the historical side (Baščaršija) to the east and modern Sarajevo (Marijin Dvor) to the west.

Centar extends to the north of Sarajevo, hemmed in the valley between the hills of Bjelave and Crni Vrh, which leads up to the Koševo City Stadium - the centrepiece for the 1984 Winter Olympics. Found within Centar are Bosnia's political institutions, such as the Presidency of Bosnia and Herzegovina, with grand buildings dating back to the Austro-Hungarian era.

Centar is a large municipality with many smaller neighbourhoods, but for tourists the best areas lie close to the Miljacka River. Found within this area are numerous parks, bars and restaurants, all just a short walk from the historic centre.

Centar makes the perfect choice for those who want the get away from the tourist areas and enjoy the city like a local.

Marijin Dvor
Marijin Dvor is the first district of Novo Sarajevo, where historic Austro-Hungarian architecture fuses with Soviet era and modern-day Sarajevo. The district is named after the palace constructed by Austrian industrialist August Braun for his wife Maria at the end of the 19th century.

Being further down the Miljacka River valley, the skyline of Marijin Dvor is dominated by 1970/80s tower blocks and modern glass-fronted towers, so it is less scenic than the districts to the east.

The Vilsonovo Šetalište is the main avenue of Marijin Dvor and offers a picturesque walk that follows the river downstream.

Marijin Dvor is a great way to discover a more modern side of Sarajevo and is a fantastic destination for the more intrepid visitor.

Ilidža
Ilidža lies to the west of Sarajevo in the Novi Grad municipality. The central part of Ilidža is a nondescript residential area, but to the far western side is Vrelo Bosne park, which spans the two rivers - Bosna and Željeznica. For those looking for a more peaceful stay, this part of the city is everything you need and more – and it's very close to the airport!

It's my first visit to Sarajevo; which district should I stay in?

For your first visit to Sarajevo you will want to be based in the Stari Grad (old town) and the Baščaršija. This is close to the main tourist attractions of the city and where many of the best hotels are situated.

Good alternatives would be Marijin Dvor or the Gorica neighbourhood in Centar. Gorica offers easy access to all the main parts and sights of the city, but is situated away from the main tourist crowds. Gorica is also the location of the largest building in the Balkans, the Avaz Tower, which is a perfect spot from which to see Sarajevo in all its glory.

Marijin Dvor, on the other hand, is a perfect mixture of everything that Sarajevo has to offer. Here you can enjoy the shopping, explore the city’s rich history and discover Sarajevo's modern life, as well as benefiting from great connections to the other parts of the city.

Always choose the location in Sarajevo you want to be based in, before looking for accommodation. This may sound obvious, but it’s all too easy to be sucked in by amazing discounts or outstanding reviews, without really considering which area you will be staying in.

Thanks to its size, Sarajevo offers some great options when it comes to business trips. The positive side of visiting a relatively small city is the fact that everything is just a few minutes away.

For those looking to stay closer to the central area of the city, the Kampus neighbourhood in Centar is the place to be based. Being Sarajevo's political and business centre, Kampus is also home to many cultural and educational institutions and has great connections to most parts of the city.

If you would prefer to escape the hustle and bustle of the city, Ilidža might be a perfect option for a business trip. This is the location of Sarajevo International Airport, and there are many good hotels nearby. When work gets too much, a visit to Ilidža's thermal sulfur spa and beautiful natural scenery will help to relax you.

Places worth visiting near Sarajevo

When in Sarajevo, it's hard to ignore the beautiful peak of Mount Trebević towering over the city. This mountain, referred to as 'the lungs of Sarajevo', can be reached by a cable car from the city centre.

In 1984, Sarajevo hosted the Winter Olympics, with the events being held in the beautiful mountains surrounding the city. The Olympic Mountains Bjelašnica, Igman, Trebević and Jahorina are only a half-hour drive from the city, and their beauty is worth visiting at any part of the year. Depending on the season, visiting these beautiful mountains is always a unique experience that will leave you wanting to come back for more.

Sarajevo is a relatively safe city to visit. There are no parts of the city that are particularly prone to crime for you to avoid. However, one thing you should watch out for is theft on trains, so make sure to keep your valuables on you and out of sight.