Where to stay in Paris? The best areas and districts for your holiday in 2022

Paris has always had allure for tourists. Be it the rich culture, the famous sights, or the world-class gastronomy, the city attracts many millions of visitors per year.

This rich culture and history of Paris is reflected in the many varied neighbourhoods, with each one boasting its own unique character and appeal.

For you visit to Paris you may wish choose accommodation right in the centre of the city, close to the main tourist sights. Equally you may wish a calmer and more authentic Parisian experience, or somewhere that is nightlife focused.

This article will provide a guide to the different areas of Paris and help you find the best location for your accommodation.

The best neighbourhoods in Paris

Paris is formed of twenty districts, called arrondissements, and two woodland parks. These arrondissements spiral outwards from the heart of Paris until they reach the Périphérique, a ring road that encircles the city. The city may be officially divided into arrondissements, but many of central areas are referred to by their historic names.

The map below shows the main tourist areas of Paris. 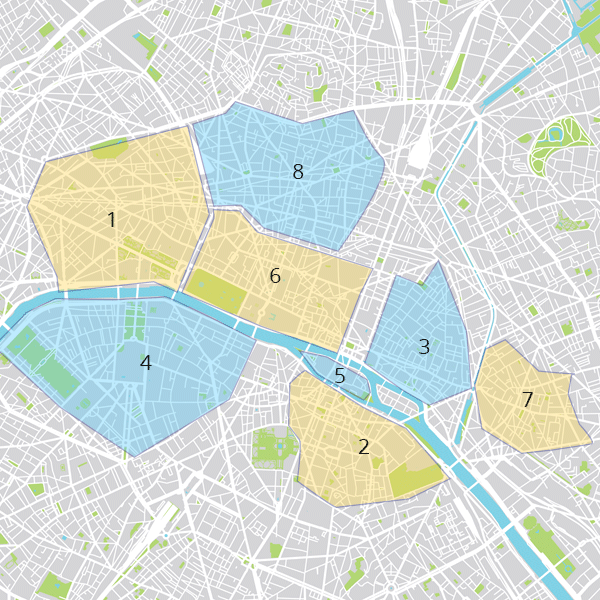 The map below shows the location of hotels and rental rooms in Paris. By altering the date to your trip, the map will display current prices and availability:

Best places to stay in Paris for a first-time visitor:

For your first visit to Paris, you will want to be based along the enchanting Champs-Elysées and its surrounding national treasures in the 8th arrondissement. More of Paris’s must-see attractions can be found in the 1st arrondissement and Le Marais, or if you want a view overlooking the Eiffel Tower consider the 7th arrondissement.

For a more vibrant location and social nightlife consider the areas of Saint Michel or Bastille. While here you can also partake in the fantastic French culture of the apéritif, or cocktail hour, which is usually held between 4 pm and 7 pm each day.

Paris is famous for its resplendent architecture and some of the most impressive buildings can be seen in the 7th arrondissement, Opéra, and the Quartier Latin. Of course, you can’t talk about the culture in Paris without mentioning the Louvre Museum in the 1st arrondissement or the Musée d’Orsay art gallery on the opposite side of the Seine River.

Business travellers in Paris might prefer staying in the upscale 2nd arrondissement or the embassy-filled 8th arrondissement. Those looking for calm in the centre of Paris should spend a day in the peaceful Jardin du Luxembourg or the Père-Lachaise Cemetery. You can also escape the hecticness of the city by visiting the forests on either side of Paris.

Always choose the location you'd like to be based in before looking for accommodation in Paris. This may sound obvious, but it is all too easy to be sucked in by an amazing discount or outstanding reviews without really considering which area you will be staying in.

Anyone travelling to Paris for important business might be looking for a high-end hotel with meeting rooms and a close proximity to Michelin-star restaurants, where clients can be charmed over the very best of French gastronomy. For this, the best areas to stay in are the 7th arrondissement, near the Eiffel Tower, or the 8th arrondissement, which contains the Champs-Elysées.

Suggestions for your first time in Paris

The best way to see Paris is by walking around some of the best-known areas of the city. Our recommended route contains many of Paris's most popular attractions and staying in any of these districts will keep you on top of the action.

You start, where else, but the symbolic Eiffel Tower in the 7th arrondissement. From there, you head north into the 8th arrondissement until you reach the Arc de Triomphe. Turning to the east, you have a full view down the Champs-Elysées and you can walk along it for a while until you reach the Grand Palais museum and Place de la Concorde. Keep going straight, past the Luxor Obelisk, into the Jardin des Tuileries.

You have now entered the 1st arrondissement and on the opposite side of the gardens sits the magnificent Louvre Museum with its controversial giant glass pyramid. Here, you may want to divert some time to explore the Louvre and see the Mona Lisa, the Venus de Milo and thousand more unique works of art. If you keep walking to the east of the museum, along the busy Rue de Rivoli, you will reach Le Marais. This neighbourhood contains Paris’s City Hall and other historic buildings, including the Saint Jacques Tower.

You can now head south across the Seine river, to the Île de la Cité and see the Conciergerie and the Notre Dame Cathedral. Crossing the river to the south again, you reach the Quartier Latin. The narrow lanes that make up the Quartier’s areas of Saint Michel and Saint Germain are packed with restaurants where you can get a decent three-course French meal for as little as €10 per person.

Where can I experience the nightlife of Paris?

Drinking is a daily event in France, with cocktail hour coming in firmly every day around 6 pm. While a mojito in the afternoon sun is always a great experience, the true Parisian nightlife is found much later in the evening.

Some of the best parties in Paris happen in the tiny clubs of Saint Michel in the north of the Quartier Latin. While the drinks can be quite expensive, the party is non-stop, with many bars and clubs to choose from. If it gets to 3 am and you start to get hungry, the cafés of Saint Michel can help you out, with a hot Croque Monsieur (grilled ham and cheese sandwich) and a spectacular view over the Seine river under the sparkling lights of Paris.

On the other side of the river, the Bastille and Le Marais neighbourhoods come alive as the night sets in. The drinks here will also be pricey (it’s hard to find cheap drinks in the capital) but this is where local Parisians come for a night out.

Where can I see the best of Parisian culture and history?

One of Paris’s most morbid historical sites is the Catacombs in Denfert Rochereau. The underground Catacombs are home to over six million human remains which were moved to this under-city quarry to make room for the city’s expansion.

This part of Paris is very pleasant, with sun-soaked cafés and parks scattered around the streets. You can also find many of Paris’s small museums around the Quartier Latin. Famous historic landmarks are primarily located in the 1st and 8th arrondissements and the Île de la Cité. If you’re in Paris to see an opera then you’ll want to be based in Opéra or Bastille where the main theatres are located.

Where can I go in Paris to relax?

One of the biggest parks in Paris is the Jardin du Luxembourg in the Quartier Latin. The shady pathways and large fountain offer some respite from the constant rush of the capital. Another option, as strange as it sounds, is the Père-Lachaise Cemetery in the Père-Lachaise neighbourhood. This large cemetery is the final resting place of many of France’s, and the World’s, most famous historical figures, including Molière, Chopin, and Oscar Wilde.

If you want to escape the busy centre of Paris, simply head east or west to the two giant wooded parks which are technically included within the city limits. The Bois de Vincennes is home to Paris’s Zoo and the Bois de Boulogne hosts the Louis Vuitton Foundation art museum.

Where can I see the amazing architecture of Paris?

The indisputable symbol of Paris is the Eiffel Tower, found in the 7th arrondissement, and a trip to the top of the tower will offer you views over the city and the nearby Paris Military School. In the same district, you can also see the gleaming golden dome of the Hotel des Invalides, a museum of France’s military history and the final resting place of Napolean Bonaparte.

You can also see some classic examples of traditional Parisian architecture in the Opéra and Madeleine neighbourhoods. Here, you can also find the Palais Garnier opera theatre and the sun-swept Rue de la Paix. The oldest parts of Paris are on the Île de la Cité. This island district is home to many incredible buildings including the renowned Notre Dame Cathedral, Sainte-Chapelle, and the Conciergerie. This chateau was once the prison of Marie Antionette and it features France’s first public clock, which still runs to this day!

What areas of Paris should I avoid?

Any visitor to Paris should be very careful with their personal belongings when travelling to any tourist-heavy areas of the city.

The capital is mostly safe during the day, but you should avoid any planned protests during your stay. The underground metro trains are also safe and often well-guarded during the day, however, they can become more dangerous after dark. If you want to go out into Paris at night, the areas you should avoid are the northern outskirts of the 18th, 19th, and 20th arrondissements.

What are the best day trips from Paris?

The closest attraction to the main city of Paris is the grand Versailles Palace. This elegant estate was once the seat of power for France’s old monarchs and the manicured gardens and park are free now for anyone to access, but you must buy a ticket to enter into the palace.

The historic town of Orléans is only a two-hour drive from Paris for anyone who wants to see a more different approach to French culture and cuisine. You can also visit Reims, which is two hours away, to see their famous Reims Notre Dame Cathedral. The symmetrical Gothic architectural style is strongly reminiscent of Paris’s own Notre Dame during its former glory.